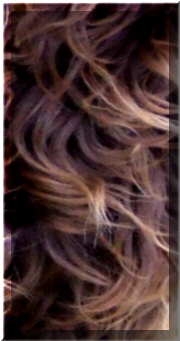 The Australian Cobberdog has a "Fleece"textured coat

Unlike a shaft of hair that is dry the fleece resembles more like a fiber, it contains natural moisture that catches and reflects light giving it a luster,  this is believed to contribute to the dogs apparent absence of skin dander along with little to no shedding. Dander is responsible for many allergic reactions humans have to animals with hair.

The Cobberdog fleece hangs in loose rippling waves held in formation by grouping called "staples", see fig1:
If clipped or shaved the wavy [genetically called straight coat] will regrow his natural soft staples. other coat types will never regrow to its original look or texture.

Still ,in today's breed development, particularly now with so many learning new breeders, with most not having any dog experience at all! Curly and wool coats are being seen.

The Curly coat referred to as Curly fleece is still an acceptable coat type, it is characterised with more pronounced staples that have a soft crimped look, when clipped they will become curly to very curly, With intense coat care the curly coat can usually be regrown to almost as good as its  original state, the reason this is possible, is that the curls remain loose and do not invert [coil] and it maintains its natural moisture and shine allowing the coat to hang, stretching the curls back into soft spiraling staples, The curly coat is usually more dense [thick] compared to the wavy coat. Breeders should be striving to breed finer [lighter less thick] coats, A fine curly coated Cobberdog is beautiful and requires medium coat maintenance.

​Genetically the curly coat has 1 straight hair gene and 1 curly gene, all genes are in pairs as nature selects 1 gene from the mother and 1 from the father, this is true for all genetics of all kinds. As puppies they are beautiful with curls and swirls and the best have an intense shine.

​The wool coat is a severe fault in the Cobberdog breed, genetically it has 1 pair of curly genes The wool coat is very cute when puppies as it is soft, fluffy and a slight fuzzy in appearance. It is dense and will grow in tight crimped staples layer on layer, when brushed it is frizzy and is dry with little to no shine when adult. when clipped it is like velvet and grows into tight inverted curls, Maintenance is high.

The Spiral Wool coat is the same as the wool coat without the extremes, it is the bridge between the dry wool and the shiny curly fleece, genetically they can be either a pair of curly genes or a very thick coated curly gene/straight gene This is where many breeders become confused even experienced breeders, I don`t because I identified and learned about  it as I developed it decades ago, Poodles actually have 2 coat types, the correct strong dry coat that does not get waterlogged and will hold its elaborate clipping styles and the "soft"coat that is limp,[finer] less thick and will not hold clipping shape easily, both poodle coat types are genetically the same however the thickness and texture is different. The bad Poodle coat was Tegans secret recipe in the very early bredings. Oh how I wish genetic testing had of been available back then! The Cobberdogs have come a long way Spiral wool is a no no same as the Wool.

The straight coat  called "Wavy fleece" is the ultimate. Genetically they have a pair of straight hair genes. As puppies they are the least pretty, they are not cute and fluffy and often have less facial hair until they get closer to 10 to 12 weeks. Staples are less defined but still obvious from 14 weeks onward.  The genetic term [genotype] "straight Coat" is very misleading,  they are in fact visually [phenotype] wavy from skin to tips forming beautiful shiny rippling swirls. When clipped it is flat and straight with recrowth forming slight waves and soft curls, with some care straight coats regrow back to perfection.
Some wavy coats [often called straight coats] still have too much density and some wavy coats lack stapling that helps maintain moisture leaving the coat a little dry and lacking sheen [luster]  The extreme straight coats have a higher tendency to slight shedding  they do have a tendency for hair breakage and the texture does become more hair like rather than fiber [ soft moist fleece ]

I called the coat Fleece because my mother and I were breeding and showing Angora goats way back when!..  I had some tanned skins as floor matts and when the dogs lay on them their coats mingled with the fleece and they looked and felt the same so I started referring the coats as fleece or wool.

In conclusion:
​Wavy Fleece, Ideal is light in density, light reflective [shiny] soft waves with loose staples when clipped curls are very soft [gentle] and will straighten as it lengthens. it is 98% non shedding. requires moderate care

​Curly Fleece, The ideal is Light in density, [referred to as Fine]  light reflective, stronger waves with more defined staples, The really nice fine coats look softly crimped. Goes very curly when clipped but with care most will regrow back to a flowing curly swirly shiny coat. Requires moderate care

Spiral wool and wool coats should not be used in breeding programs.